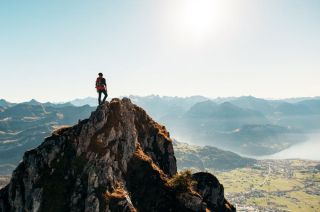 Pursue the Path of Resistance

Let’s all be clear on this issue…the path to living a healthier lifestyle is ‘the path of resistance’. It's a mountain to climb.  Hanging out in the Valley of Complacency, camping out in a Comfort Cave and floating down the River of Ordinary Health don’t take much effort.  So why choose to climb the mountain to reach the summit and achieve your goals?  It will make you stronger and you’ll feel better if you climb.  It will leave a legacy that casts a shadow beyond the grave.  You and your family will live healthier, more successful and significant lives if you choose the path of resistance.

Those who climb mountains don’t say it’s easy but they all say it was worth the extra effort when they got to the top and looked down at their accomplishments.  It inspires them to find new mountains to climb.

“Life is either a Daring Adventure or Nothing” ~ Hellen Keller

Here’s a great lesson on Goal Setting from the World’s #1 Goal Achiever.  When he was just 15, John Goddard was inspired to create a list of 127 “life goals” (he called it “My Life List”). On a simple, yellow legal pad the young boy listed things he had fantasized about. Many of the experiences he dreamed of he had first encountered reading the encyclopedia (he grew up without television and read the encyclopedia for entertainment).

At the age of 70, John had accomplished 111 of his original 127 --- PLUS 500 others he set along the way! Here’s just a few of the ones he’s reached: He’s climbed many of the world’s major peaks including the Matterhorn, Ararat, Kilimanjaro, Fiji, Rainier and the Grand Tetons. He followed Marco Polo’s route through all of the Middle East, Asia and China. He’s run a mile in five minutes, broad jumped 15 feet, high jumped five feet and performed 200 sit-ups and 20 pull-ups. He was the first person to explore the

4200-mile length of the world's longest river, the Nile. It was the number one goal of his life when he made his original list at 15, and prompted the L.A. Times to name him “The Real Life Indiana Jones” when he achieved it. He has also been down the Amazon, Congo and other major rivers of the world.

John has been to 122 countries, lived with 260 different tribal groups, and explored the underwater reefs of Florida, the Great Barrier Reef in Australia, the Red Sea, and more. He has flown 40 different types of aircraft and still holds civilian air records; has read the Bible cover to cover and learned to speak French, Spanish and Arabic. The last two on his original list included marrying and having children (he has six) and living to see the 21st Century, which he has done in style along with many more.

I think you get the point. More than just one of the greatest adventurers the world has ever known, Goddard is an incredibly wise person, as this quote of his demonstrates: "If you really know what you want out of life, it's amazing how opportunities will come to enable you to carry them out."

What was John’s secret? First, he wrote his dreams down. I’ll bet you’ve heard this before. I heard it for many years and ignored it. The fact is writing your goals down is powerful, increasing your chances of success by at least 1000% according to Brian Tracy, an expert on goal setting and achievement. John’s second secret is that his dreams were BIG. There’s no power at all in small dreams. When the dream isn’t big enough, it’s too easy to give into the obstacles that appear in our life. It’s very difficult to maintain the persistence that all great achievement requires when the dream is small or ordinary.

Regardless of where you are today on the path you can choose to change your situation.  All it takes is for you to begin to focus on your Desired Outcome and set a S.M.A.R.T. 1 yr. and a 28-Day Health Goal.  These S.M.A.R.T. goals should be Specific, Measurable, Attainable, Realistic, and Time Sensitive.  Most individuals can start with a weight goal or a healthy Body Mass Index (BMI) score as they both qualify as S.M.A.R.T. goals.  Reducing one’s body weight is also the number one thing one can do to improve their health so I recommend you start there and focus on achieving it in the next 28 Days.

Once you know where you are and where you’re going it now time to simply make the choice to start the journey.  Do you what day is the best day to go on a diet?  I’ve heard Monday, “Someday”, or some say “tomorrow” but tomorrow is the busiest day of the week so I wouldn’t recommend it!  In reality there is no perfect day to start a “diet”.

According to the National Weight Control Registry, 85% of dieters gain the weight back within 2 years of losing it without formal behavior modification so there is no good day to join the diet club but the day you choose to live a healthier, more successful and significant life is the best day of your life!

Plug into the community of support to be encouraged by others and to encourage others! Together we can all ascend the mountain of optimal health!

Holidays, parties, and other events are often a combination of fun, food, and emotion. Whether you’re watching your favorite team compete in the championship, sitting down for a Thanksgiving feast, or celebrating your daughter’s wedding day, good food usually accompanies good feelings. Emotions play an important role in our eating patterns. At big events, we eat to create or enhance pleasurable feelings: to bond with others, to recapture the past, and to comfort ourselves. But just as real is the other side of the story: Out-of-control eating creates great emotional pain for many of us. Years of unhealthy choices have made us feel unhappy, tired, discouraged, and even ashamed. The trick is to learn how to experience the good feelings without overeating. This takes time, so be gentle with yourself and seek progress, not perfection